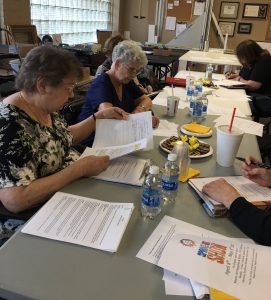 In the beginning, there were 5 young women who loved to paint. They would get together to paint and critique each other’s work. Later, they decided to form a club, The Brush & Palette Club. Their rules were simple. Dues were $10 a year and all members should participate in two shows a year. They had a Chairperson, Correspondence-Secretary and Treasurer, who were elected every year and two other members.

Their purpose was to bring together individuals in the community who had an active interest in painting. The artists must be willing to combine their talents, in the various capacities to which they were individually suited, to be of greatest value to one another and to the club.

In 1973, the Brush & Palette Club became the Conway League of Artists. Their interest was still to bring together individuals who had an active interest in producing visual art. The League sponsored workshops, programs about art, group critique and art exhibits to improve artist’s skills and build confidence.

In 1976, a scholarship fund was established at the University Of Central 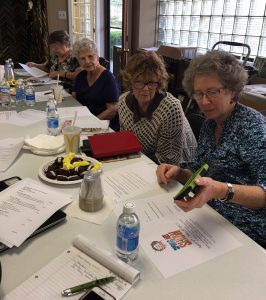 Arkansas (UCA) for an art student. The funding would be supported by the League. They raffled a donated painting, by one of the members every month and the money from this raffle would be given to the UCA Fund. UCA would select an art student to whom the money was given to be used to purchase art supplies. UCA refers to this fund as the Dorris Curtis Fund and it is awarded to a senior student in the fall and spring semester.

For over the last forty years, the Conway League of Artists has given to over 80 students, who are pursuing an art career.

In summary,members of the Conway League of Artists are still willing to combine their talents, to be of greatest value to one another, still support the scholarship fund, the club and the community.